Tourtière: A Tribute to our Neighbors to the North

Forget about Christmas or a trip to Disneyland … tomorrow is the first day of the Olympics.  I can barely contain my excitement.

Scott and I are proverbial Olympic nerds.  When the Olympics are on, we watch nothing else … and we’d do it 24/7 if we were able to.  In fact, an hour before we were engaged, we took pictures standing on the old Olympic medal podiums in the Olympic museum atop Squaw Valley  (Tahoe, CA).  Little did I know I was actually “going for the gold” that night.

Any way, in our household it is a tradition to cook a meal hailing from the region of the Olympic host country on the night of the opening ceremonies.  Two summers ago when the games were in China, it was quite easy.  This time around coming up with a Canadian meal has proven to be a challenge.

However, I am excited to announce, the meal has been officially selected: Tourtière.

After much research, this is what I learned about this traditional Canadian dish:

A tourtière is a meat pie originating from Quebec, usually made with ground pork and/or veal, or beef. It is a traditional part of the Christmas and/or Christmas Eve réveillon and New Year’s Eve meal in Quebec, but is also enjoyed and sold in grocery stores all year long. This kind of pie is known as pâté à la viande (literally, meat pie) in the Saguenay-Lac-Saint-Jean region. 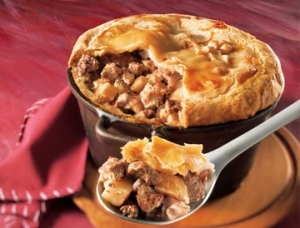 I have found a few good recipes online, and I will probably make a modified version since I’m a selective meat eater.  Feel free to check out this traditional recipe, this Cooking Light(r) recipe or this vegetarian version.